The Theory of Multiple Intelligences was devised by an American psychologist named Howard Gardner, to oppose the paradigm that had been established that there was only one intelligence. Gardner proposed that humanity required the development of different styles of intelligence, but without entering into the contradiction of the scientific definition that this had, as Gardner shared it, he also thought that intelligence was the ability to solve problems or produce valuable goods.

Working with people who had suffered some kind of brain damage taught Gardner that the most important thing is the area in which the injury is suffered, since depending on the area in which it is located, there will be different strengths and weaknesses, such as the loss of speech, musical dexterity, motor skills, body mobility or orientation. In the field of education, the theory of multiple intelligences represented a questioning and a challenge at the same time.

When working with children, he observed a very similar process, since he considers that there are children who develop very well in the linguistic area, others very good in mathematics, science, sports… But in many cases, they were very good in one area, but incapable of analysing or going deeper in another. The key thing was that he saw that you could have great skills for some things, but at the same time not have other skills that prevented you from doing different things.

Such as, for example, great musical ability, but no gymnastic or sporting ability. This discovery made it possible to see that the term intelligence was poorly formulated, as there is not just one way of being intelligent or one way of measuring it. That is why Gardner considers that there are eight predominant intelligences, with specific abilities and skills for each of them: 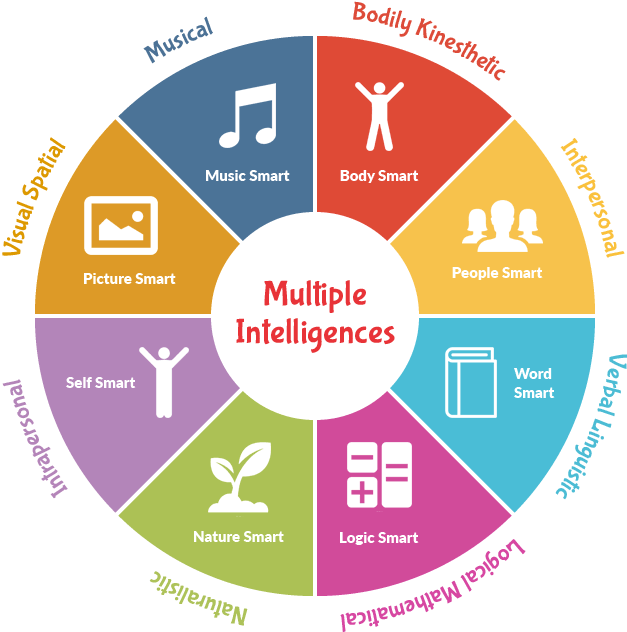 According to Gardner, all people have each and every one of the 8 types of intelligence, but each one stands out more in a particular one than in the others, all having the same value and importance. Normally, it is necessary to master a large part of them in order to be able to cope with life, regardless of the profession we work in, since most jobs use most of the intelligence styles.

In classroom, from a very young age, we receive an education with contents and procedures focused on clearly assessing two styles of intelligence, linguistic and logical-mathematical, but this is insufficient to educate children and students with all possible potential. That is why Howard Gardner, through his theory, managed to debate the need for a change in the educational paradigm, stressing that the most important aspect of his theory was not the 8 proposed intelligences, but the conceptualisation of human cognition with parallel and independent processes. For this reason, he has commented on other occasions that possibly the multiple intelligences are not really the ones he proposed, but others that have not been taken into account or that are grouped together under the name of a single intelligence.

He considers that intelligence links the ability to solve problems and to create cultural products, so from this point of view, it is a concept totally related to creativity. At the same time, each intelligence represents a way of seeing or knowing the world, since each person has their own unique intelligence profile.

If intelligence is not a universal parameter and each person has a different profile, it is clear that during the learning process and its evaluation system, different aspects such as diversity, individual abilities, brain constitution, environment and cultural context have to be taken into account. In education, this theory has therefore established guidelines for recognising and accepting diversity and at the same time establishing principles of equality.

Ideally, the centre should include methodologies and analysis processes to be able to detect children’s abilities from a very young age, and thus be able to promote a suitable approach to the future, such as in the choice of a professional career related to their qualities and abilities. There are centres that use a style of pedagogies that develop mechanisms to identify the different intelligences, and that help to promote them, applying the methodology to other subjects. So, what we can clearly see thanks to this theory of multiple intelligences is that the most appropriate thing for the future of our children is that they can develop in the workplace in what makes them happy, enhances their skills, and enjoying and excelling in what they are passionate about and what they like.